The Cancer Diary: Afterthought 6 – What worked, What hurt

The Cancer Diary: Afterthought 6 – What worked, What hurt

I just packed up the GB 4000 MOPA radio frequency Rife machine and sent it on its way to a woman with recurrent breast cancer. She’s in my thoughts  as I write this. I hope she has a much longer life after beginning treatment than Max had. Certainly the Cellect/Budwig program along with the 4000 Mopa gave him a short shot at recovery, but he was too advanced in his disease to really benefit from it for long. He put on weight and was a bit more mobile after embarking on this course of treatment, but the benefits only lasted for 6 weeks, and then the disease roared back and he deteriorated rapidly. He was dead three weeks later.

I promised I would write about what worked and what hurt, but I’ve hesitated to do this because I needed to process the whole picture. To be frank, the alternative treatments worked temporarily, but failed to fight this terrible affliction. What I had been promised by the purveyor of these potions and pills is that Max would have a better life style on them than without them, but no one promised a longer life. I was told he had had too many courses of chemo, too much surgery, too lengthy a road of conventional therapy. And that might be true. A recent article in the New York Times addressed the lack of positive outcomes with chemotherapy. It pointed to statistics that showed people who did chemo didn’t live any longer than people who abstained. 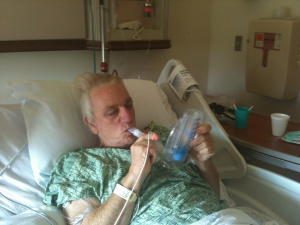 The alternative practitioners told me the less chemo/radiation/surgery a person has endured, the better their outcome on the recommended treatment. I would love to hear from cancer patients who have gone both ways and find out what they have to say about it. Is it possible that if Max had been a “virgin” he would have been better off? That all the cumulative treatments he undertook, overtook him? I can’t deny he might have lived better without the chemo, but would he have lived longer? There are still so many questions. The fear we had to face in light of his disease and prognosis drove us to grasp onto conventional treatment. Were we wrong in doing this? Should we have sought another way? And, then, there are the stories of Farrah Fawcett, Steve Jobs and Steve McQueen. Did they do the right thing seeking complimentary medicine over conventional?  Is there an answer or are we still in the dark around cancer? As they say: The jury’s still out on this one.